From Boots to Keyboard

Among the group of wildland firefighters that converged on the small Interior Alaska community of Allakaket in June to manage efforts on a cluster of fires burning in the area was one of the village’s own.

When Calvin Moses, an information technology specialist for the Bureau of Land Management Alaska Fire Service, first showed up in Allakaket on June 29 wearing Nomex fire gear, he passed himself off as a villager working in the fire camp. While waiting for computer equipment to arrive, a helicopter crewmember graciously identified some of the people getting off the plane as Chena Interagency Hotshots, not knowing that the homegrown Moses had spent most of his life since 1985 firefighting in a variety of ways including as a Chena hotshot. Moses played it up, asking “silly questions” that a newbie would ask. Old friends from his hometown kept walking up to Moses and shaking his hand, unknowningly helping this charade.

It wasn’t until Moses’ equipment arrived on a plane that he thought he’d reveal his true role before he got questioned taking computer gear to the Alatna Complex incident command post set up at the village school.

“Finally I couldn’t help it any more because I was packing my stuff up. I went over and introduced myself as the IT specialist there,” said the easy going Moses. He and the helicopter crewmember had a good laugh about it. “It was all in good fun.”

Moses is used to being misjudged. Several times while managing an eight to 10 person initial attack helicopter crew in Nevada and Utah, people would walk by Moses and talk to his second-in-command, a white man, thinking he was in charge. Moses said it never bothered him.

Calvin Moses (pictured in the back row, third from the right) worked on the entry-level North Star hand crew in 1988, followed by stints on the BLM Alaska Fire Service interagency hotshot crews.

Moses has worked his way up through Alaska’s wildland firefighting roles – first on the physically demanding hand crews then as an elite hotshot, a multi-qualified fire specialist, helitack crew and now in the more analytical position as an IT specialist. He is one of eight people that work in BLM AFS’s IT shop – one of the few BLM IT offices that primarily support wildland firefighting. Now, Moses’ part in wildland firefighting is working on 11 BLM AFS lightning detection sites around the state, setting up IT infrastructure on fires and putting together laptops kits for fire assignments – roles that he relishes. During the winter, he also coordinates the printers for the BLM AFS and the BLM Fairbanks District Office across town.

Moses is the youngest of 11 children born to Johnson Moses Sr., a Koyukon Athabascan, and Bertha Nictune Moses, a Kobuk Inupiat. Growing up, his mother was very strict about having her children get an education. Neither one of Moses’ parents went to school past the second or third grade. After graduating from Andrew K. Demoski High in Nulato, Moses started spending his summers working fires, first working sporadically as an Emergency Firefighter (EFF), then for the entry-level North Star crew in 1988 before he joined the Chena Hotshots the next year. In 1991, he switched to the Midnight Suns Interagency Hotshots for a final two years. 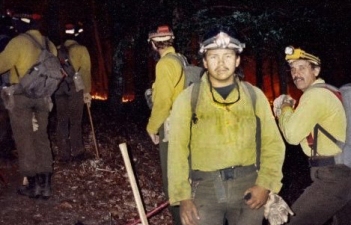 During his summers, Moses focused on working on fires and making as money as he could, trying to keep his mind off of the cultural things he was missing back home such as summer potlatches and hunting and fishing seasons. He had two wake-up calls – the news that he was going to be a father in 1991 and a knee injury requiring surgery in 1992 – that changed his lifestyle and career goals. These two lessons taught him that he wasn’t invincible and his hard working-hard living lifestyle wasn’t going to suffice for raising a family. His last drink of alcohol was Nov. 15, 1991. In 1993, he joined the BLM AFS Fire Specialist Section (FSS) and concentrated on working hard in a variety of different wildland firefighting roles. The Fire Specialist Section is a pool of wildland firefighters with a mixture of qualifications that individually fill positions in support of fire activities. Moses liked working as an FSS whether it was as a helicopter crewmember,  strike team leader, base camp manager, crew representative and “whatever they needed us to do that we were trained up to do,” he said. “I think that’s why Alaskans are in high demand because they’ve been exposed to different things.”

Most of his fire assignments revolved around a helicopter, either in Alaska or in the Lower 48 – typically in Utah and Nevada. Eventually, hearing about and knowing people that were injured or killed in helicopter crashes started weighing heavily upon him. An injury from slipping on a helicopter skid in 2000 on top of all the other injuries he had suffered while tromping through Alaska tundra or up and down mountains made him start thinking seriously about a career beyond firefighting. He had started taking classes at the University of Alaska Fairbanks (UAF) in 1998 with the idea of getting a business degree. That changed when his computer broke. He bought a book on how to troubleshoot the computer and fixed it himself. After that, his friends started asking him to fix their computers. That led to a few computer classes and he was hooked.

In 2001, he interviewed for a job with IBM in St. Paul, Minnesota. That same day, his supervisor at BLM AFS, FSS Lead Tony Doty, called him and asked if he was coming back for another year of firefighting.

Moses’s answer was no.

Doty said it’s not uncommon for fire specialists to move on to other positions or other careers after a few years because it’s treated as a sort of proving ground for wildland firefighting careers beyond hand crews.

“Calvin had his dream and I was going to help him with that,” Doty said by phone from California where he lives now that he’s retired. “He’s a great guy. It was in the best interest of AFS to keep him around whether it was a fire position or not.” 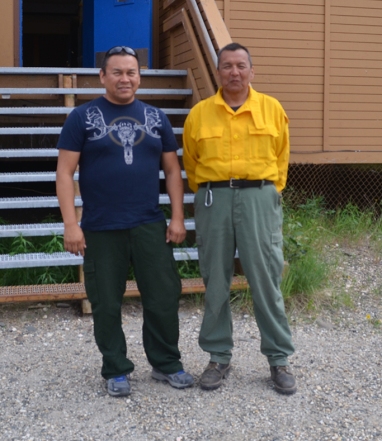 Calvin Moses (on lef) and his brother Rudy both worked on the Alatna Complex in Allakaket in June. Photo by Celeste Prescott/BLM Alaska Fire Service

Doty and Bev Fronterhouse, who is in charge of business and technology at BLM AFS, came up with a proposition for Moses. He could start out working in the IT department at BLM AFS as a student employee through UAF. It didn’t take much to convince Moses to stick around. He would be a full-time employee, use all those years working for BLM AFS toward a federal retirement, and stay in Alaska where he could continue to raise his six daughters. They range in age from 8 to 24.

“Tony opened the door and Bev pushed it wide open,” Moses said. “I haven’t regretted it one bit.”

His first task was to take four broken computers and convert them into two working computers. Now he puts together computer kits for people going out on fires. He was in Allakaket in June to set up the computer system.

Moses’ favorite part of working on fires – to go on assignment, working hard to set things up and meeting new people – is also his strength, said his supervisor, Alex Clarke.

Last July he was busy with the Alaska Type 2 Incident Management Team first on the Tok River Fire, and then on the McHugh Fire south of Anchorage. In previous years he was on a Type 1 incident, the largest in terms for complexity and response, for a fire in California putting together the network for the team operating out of a shuttered lumber yard.

“I had to network the whole place using cables that were hanging out of the wall, hooking up cable and phone lines,” he said. “It took me almost a whole assignment to set up in place. It kept me really busy. I did my 14 hours, go to my hotel, sleep and get up and go back to work. That was probably my funnest fire.”

Because he likes the challenge of the job, he intends to stay in IT until he can retire in about 10 years.

“I learn something every other day, if not every day,” he said. “I’m kind of stubborn. I like to learn things on my own. I do my research and if I can’t figure it out, then I’ll ask about it.”

That retirement will come about the same time that his youngest will be striking out on her own. He then intends to spend a lot more time in Allakaket with family and enjoying some of those traditional Native activities he’s missed because of the many fire seasons.