Help comes from far and wide to fight Alaska fires

They come from Montana and Minnesota, from California and Colorado, and from North Carolina and New Hampshire. 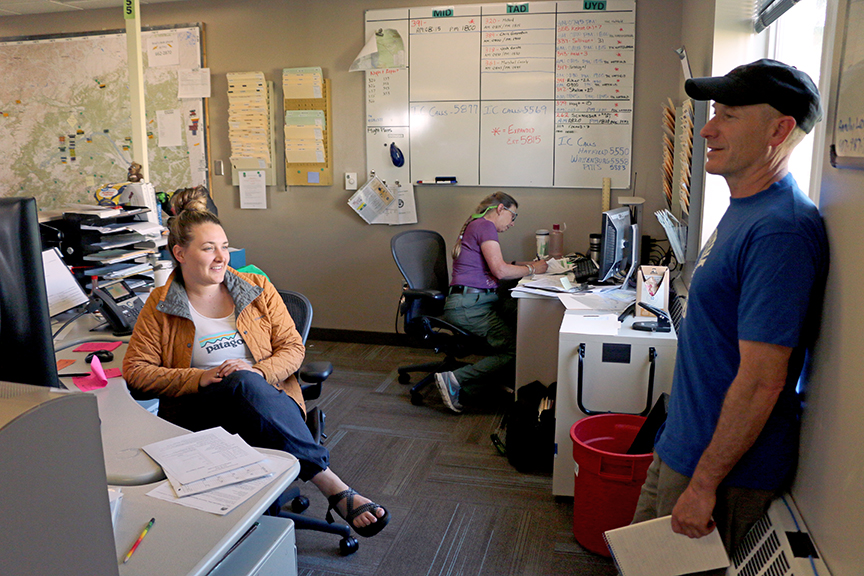 Dispatcher Carsissa Chadwick of Wenachee, Wash. talks to BLM AFS Upper Yukon Zone Duty Officer Jay Wattenbarger about a fire he is managing on June 28. In back, Terry Gallagher from Wisconsin works as a Situation Unit Leader (SITL). A SITL is responsible for collecting and organizing incident status and information and evaluating, analyzing, and displaying that information used by firefighter personnel and dispatchers. Photo by Beth Ipsen, BLM AFS

With all of Alaska’s wildland firefighters already hard at work, reinforcements have arrived or are on their way from 33 states, the District of Columbia, and Puerto Rico to help with a busy fire season.  More than 1,500 fire personnel in Alaska are from the Lower 48.  Many are wielding shovels, chainsaws, and hoses to fight the flames.  But there are also dispatchers, communication technicians, mapping specialists, strategic planners, air tanker managers, and procurement specialists.  Their work is also critical to the firefighting effort, as they provide direction and support to the crews on the ground.

Graham MaGee and Paul Valentine map out a plan for Big State Wildfire suppression support services to do structure protection including setting up pumps and sprinkler kits on Parch and Martin subdivisions. Photo by Kale Casey, Pacific Northwest Team 2

While the number of out-of-state resources is significant, it’s well below the nearly 5,800 that traveled to Alaska to provide assistance in 2015.  That was the second busiest fire season on record.  Alaska is able to access the resources it needs because of relatively low fire activity in the Lower 48 so far this year.  Because there are national fire qualification standards, firefighting personnel from various areas of the country are able to work cooperatively and effectively together. When Alaska’s fire season winds down, Alaska’s firefighters will return the favor and head south to put out fires in the Lower 48.

We are grateful for the help from our Lower 48 brothers and sisters!

Firefighters Jay Yancick of the Saguraro National Park Wildland Fire Module from Tuscon (in black hat) and Kim Wong of the Yukon-Charley Rivers National Park and Preserve (kneeling) check in at the Expanded Dispatch Center at the BLM Alaska Fire Service facilities on Fort Wainwright on June 28, 2019. An Expanded Dispatch Center was activated to provide logistical coordination and support for agency centers in Alaska. Dispatchers include Peggy Kern of Coeur d’Alene (in purple); Jim Oberrieter of Littleton, Colo (in green); Beth Cramer (on phone in back); and Alaskans Dispatch Center Manager Randy Nichols (in hat) who is talking to Maurice McGinty, an emergency fire to fill the role as a Receiving Distribution Manager at the AFS Warehouse. In front are dispatchers Elmer Orosco of Portland and Ted Spencer of Boise. Photo by Beth Ipsen, BLM AFS 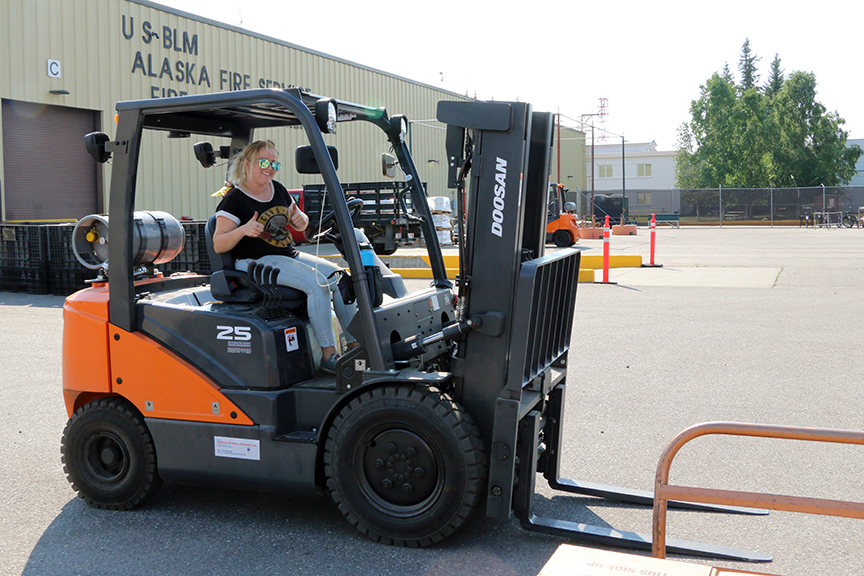 Kate Barthel, a materials handler from the Rocky Mountain Fire Cache in Denver, is in Alaska helping with the workload of equipment being issued out of the BLM Alaska Fire Service Cache. The AFS Cache provides supplies and equipoment for all fire suppression and fire management operations in coordination with other statewide agencies. Photo by Beth Ipsen, BLM AFS