9:00 – Alaska is fortunate to have a large pool of over 1000 personnel available on an annual basis to fight fire. The current outbreak of fire in Alaska has resulted something new since the inception of the Emergency Firefighter program (EFF) in 1977: all available Emergency firefighting crews were assigned and out fighting fire within two days, starting June 16 and 17.

The rural portion of the crews, the Emergency Firefighter (EFF) crews are often composed of Alaska Natives. These crews are unique in that they are available on short notice, often come from the remote areas of Alaska, have understanding of local terrain, and are adept at living and working in the bush environment.

This relationship between firefighting agencies and the bush fire professionals is win-win. While the crews provide both a presence and initial response to fires in remote areas, the agencies provide training, equipment and economic support. The side economic benefit of the relationship is the benefit to both the community and local economies.

At present, all available fire personnel are committed to working on fires. As a result, fire managers are bringing in resources from the lower 48 and Canada to support current firefighting efforts.

Additionally all other state operational fire personnel statewide are assigned to current fires around the state. As additional fires continue to be found, fire managers have been force to reach out to their neighbors in the lower 48 and Canada (Alberta and British Columbia).  Firefighters from as far away as Georgia have flown in to assist in the suppression and monitoring of over 149 fires currently burning. Canada is providing aircraft, smokejumpers, and “rapattacks” (firefighters who rappel from helicopters) to support the effort.

Once Alaska’s fire season winds down, the favor will be reversed with Alaska crews traveling to the lower 48 to help out if needed. 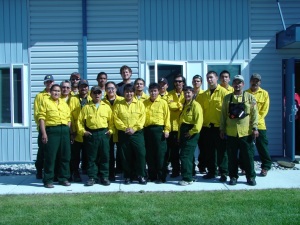