A wildfire burning in remote Southwest Alaska is now estimated at almost 10,500 acres but fire behavior has moderated considerably as a result of rain, cooler temperatures and rising relative humidity.

The latest acreage estimate for the Medfra Fire as of late Wednesday night was 10,488 acres. The fire is burning approximately 50 miles northeast of McGrath and is actually two fires that have merged into one. The Medfra and Berry Creek fires, both of which started a few miles apart on Sunday as a result of holdover fires from 2015, merged sometime Tuesday night.

Rain began falling on the fire at around 11 p.m. Wednesday and continued through the night, slowing the growth of the fire.
The Alaska Division of Forestry has 78 personnel assigned to the fire, including a Type 2 initial attack crew from Fairbanks (White Mountain) and three Type 2 crews from the villages of Lower Kalskag, Upper Kalskage and Nondalton . In addition, five of the eight BLM Alaska Fire Service smokejumpers that have been working on the fire since Sunday are scheduled to be demobilized from the fire today

On Wednesday, firefighters completed structure protection measures around one cabin that is threatened by the fire and are also working to protect three Native allotments in the area of the fire. The wetter, cooler weather should give firefighters a chance to reinforce lines they have been working on to protect allotments.

Prior to last night’s rain, the fire was most active in the area where the two fires merged together on the northern perimeter. 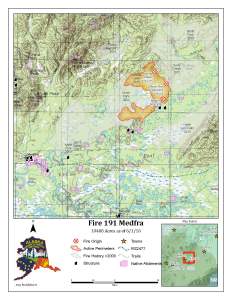 An Alaska Division of Forestry perimeter map of the 10,488-acre Medfra Fire burning about 50 miles northeast of McGrath.