By Alaska Division of Forestry on October 16, 2016

Sunday, Oct. 16 – 10:30 a.m. – Firefighters were back on the line at first light Sunday to continue work on containing a wildfire that started on Saturday along the Glenn Highway near Sutton in the Matanuska Valley.

The Moose Creek Fire is burning about 12 miles north of Palmer and 5 miles south of Sutton. The Glenn Highway remains open but motorists passing through the area should slow down and be alert for firefighters and firefighting equipment on the road.

The latest size estimate for the fire is 216 acres and there are approximately 50 personnel from multiple agencies and fire departments working together to suppress the blaze. 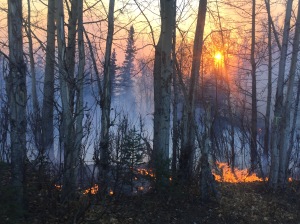 Surface fuels burn in the Moose Creek Fire late Saturday afternoon near Sutton. The fire is now estimated at 216 acres and there are 50 personnel working to suppress it. Photo by Sarah Saarloos/Alaska Division of Forestry

A half-dozen engine crews monitored the fire perimeter overnight and contained one small fire that jumped the containment line on the northwest corner of the fire. Firefighters will be working today to ensure that slop-over fire is completely out and does not pose a threat.

The main focus today will be securing the north and east flanks of the fire. Two helicopters equipped with water buckets will be used to support firefighters’ efforts on the ground to keep the fire from spreading in either of those directions.

Firefighters will also be locating and cutting hazard trees – called snags – which pose a danger to firefighters on the ground. The trees’ root systems have been burned and weakened by the fire, making them susceptible to falling or being blown over.

On sections of the perimeter that are contained, crews will be mopping up 100 feet inside the fire line and extinguishing any hot spots they find. A bull dozer is also being used to put in containment line to keep the fire boxed in.

A map showing the perimeter of the 216-acre Moose Creek Fire as of 8 p.m. Saturday.

Firefighters are being challenged by high winds and cold temperatures. Several hoses and water tanks placed in strategic locations for hose and bucket work froze overnight due to below-freezing temperatures. The high winds not only pose a threat by fanning flames and intensifying heat in areas that are still burning, but also have the potential to blow weakened trees over or onto power lines.

No homes have been damaged and no evacuation orders have been issued thus far, though an evacuation advisory was issued for the Palmer Correctional Center at Mile 58 of the Glenn Highway.

The fire was reported at 10 acres early Saturday morning by a motorist on the Glenn Highway but it grew rapidly due to high winds and was approximately 100 acres by the time the Alaska Division of Forestry and personnel from local fire departments could mount a unified response.

Given the dry, windy conditions, the Alaska Division of Forestry is asking residents in Southcentral Alaska to avoid burning until conditions moderate. This includes the use of burn barrels or open debris burning.