By Alaska Division of Forestry on October 21, 2016

Friday, Oct. 21 – 10:25 a.m. – With a little help from Mother Nature, firefighters on Thursday continued to gain ground on a wildfire smoldering along the Glenn Highway north of Palmer.

The 303-acre Moose Creek Fire is now 83 percent contained, according to a perimeter map released by the Alaska Division of Forestry on Thursday night. That’s up from 70 percent containment the previous day.

Fire managers are getting assistance from Mother Nature in the form of rain and snow. The fire received light rain on Thursday and about 2 inches of snow had fallen on the fire as of 10 a.m. Friday, according to Incident Commander Phil Blydenburgh with the Alaska Division of Forestry.

Fire behavior on Thursday was reduced to smoldering due to the rain and the same kind of fire behavior was expected with the snow on Friday.

Given the weather and icy road conditions, the State Forestry office in Palmer sent only a small force out to the fire Friday morning. The fire is located about 12 miles north of Palmer and 5 miles south of Sutton, near Mile 56 of the Glenn Highway.

“We’re going to evaluate it based on risk,” Blydenburgh said. “We’re not worried about the fire going anywhere at this point but we don’t want people driving out there if they don’t need to.”

In addition, the weather conditions increase the potential for accidents or injuries on the fire, Blydenburg said.

“If we get someone injured on those back roads up there, they’re so slippery and messy that we’d have to get them out by ATV and we don’t want that,” he said.

The only uncontained fire line remaining is on the southwestern perimeter paralleling the Glenn Highway and dozer line has been constructed to keep much of that in check. 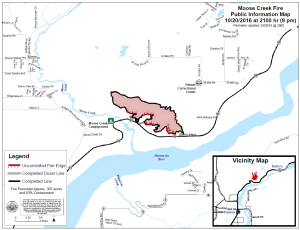 There are still about 60 personnel working on the fire, most of which are from the Division of Forestry, as many resources from other agencies that were supporting the suppression effort were demobilized at the end of shift on Thursday.

Firefighters have flagged any areas with signs of heat remaining and there will be a small force monitoring the fire over the weekend, Blydenburgh said.

“We have the areas of heat we want to keep an eye on identified,” he said. “If it warms up and the snow melts we know right where we need to go.”

Fire managers are also evaluating the feasibility and safety of suppression rehabilitation, given the sketchy weather conditions.

The Moose Creek Fire started early on October 15 as the result of an escaped debris burn and spread quickly due to high winds. The fire was already at 100 acres by the time the Division of Forestry could mount a unified response and high winds the first three days of the fire had firefighters scrambling to keep up with it.

The winds died down on Wednesday, allowing firefighters to go on the offensive and the containment percentage has been increasing daily since. With Mother Nature’s assistance, fire managers are hoping to have the fire 100 percent contained by the end of the weekend.