Smokejumpers are mopping up the Shovun Lake Fire (#371) a day after they and four Fire Boss airplanes were able to contain the new fire burning north of Fort Yukon Saturday. The eight smokejumpers and four water-scooping airplanes were sent to the fire soon after it was discovered by BLM Alaska Fire Service personnel aboard a detection flight Saturday afternoon. The fire was contained at just under four acres. The fire was burning in a full management option area within 1.5 miles of a cluster of Native allotments.

Fire managers continue to keep an eye on wildfires burning in the Interior Alaska where dry, hot conditions continue. Yesterday, the weather was hotter and drier than predicted in the Yukon Flats with temperatures in the 80s and relative humidity levels in the 20s. A new fire, the Sucker River Fire (#373) was discovered about 24 miles southeast of Fort Yukon by a BLM AFS helicopter flying in the area Sunday morning. It’s being monitored because is burning in a limited protection area in the Yukon Flats National Wildlife Refuge and is not threatening any known sites of value.

The drier, hotter conditions have also has triggered increased fire activity on some existing wildfires, especially the 41,186-acre Boulder Creek Fire (#292) burning 60 miles northeast of Fort Yukon in the Arctic National Wildlife Refuge. A front is forecasted to move in from the west coast of Alaska on Tuesday and bring cooler temperatures with widespread wetting rain. However, the forecast hasn’t always panned out for northeastern Alaska. If the increased fire activity continues, fire officials will weigh whether firefighters are needed to protect threatened cabins and Native allotments. Otherwise, fires are burning in a limited management option areas and are allowed to function in their natural ecological role.

Meanwhile, three firefighters are working hard to protect an an allotment from the Khotol Fire (#183) burning 14 miles east of Kaltag. This 14,449-acre fire has periodically caused trouble for fire managers since it started on June 6. It is burning in a limited management option area on Native Corporation land and will sometimes threaten two large native allotments nearby. BLM AFS Galena Zone firefighters have spent a few days putting in saw line and a hose lay around an allotment. They anticipate wrapping work on the fire and demobilizing today.

Smokejumpers and the Type 2 North Star Fire Crew were busy on Saturday securing a line around a cabin to protect it from the 53,637-acre Nowitna Fire (#336) burning 70 miles southwest from Tanana. The North Star Crew took operational control of the fire from smokejumpers who plan to demobilize today. 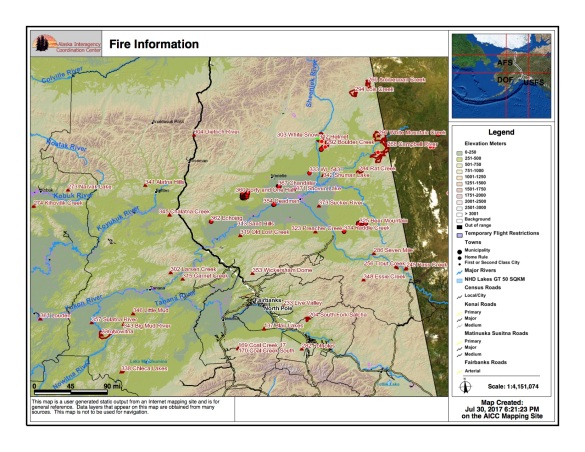 This Alaska Interagency Coordination Center map shows the locations of fires burning in the northern Interior of Alaska on July 30, 2017. Click on link for a PDF version of the map 7-30-17 Northern Interior Fires