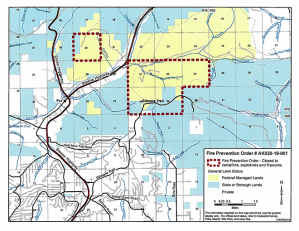 FAIRBANKS, Alaska – The Bureau of Land Management (BLM) has issued a Fire Prevention Order prohibiting campfires, explosives and fireworks on federal lands in a fire-prone area of black spruce off of Gilmore Trail north of Fairbanks and north of the National Oceanic and Atmospheric Administration (NOAA) facility site on the Steese Highway. This is the third consecutive year the BLM’s Eastern Interior Field Office in Fairbanks has issued the order, which is intended to ensure public safety and protect nearby property and residences. This year a small section of public land at the end of Brier Road northeast of Fox is also included in the closure, which went into effect on May 3.

In recent years, firefighters and law enforcement personnel have found numerous unattended bonfires on federal land off of Gilmore Trail, leading to concerns that an escaped fire could threaten local residences as well as the NOAA facility on Gilmore Creek.

“The BLM has for years worked closely with neighborhood residents to address safety concerns and be a good neighbor, said Eastern Interior Field Manager Adam Carr. “This Fire Prevention Order is a useful tool in that effort.”

Anyone convicted of violating this order could face a fine of up to $1,000, could spend up to a year in jail and be responsible for costs associated with fire suppression and damages. The fire prevention order will end Oct. 31 unless it is rescinded as determined by conditions and human activity.

The continued need for the Fire Prevention Order will be revisited at the end of the fire season. The BLM is also evaluating more long-term options for reducing wildfire hazards on federal lands in the area.

The BLM manages more than 245 million acres of public land located primarily in 12 Western states, including Alaska. The BLM also administers 700 million acres of sub-surface mineral estate throughout the nation. The agency’s mission is to sustain the health, diversity, and productivity of America’s public lands for the use and enjoyment of present and future generations. Diverse activities authorized on these lands generated $75 billion in sales of goods and services throughout the American economy in fiscal year 2016—more than any other agency in the Department of the Interior. These activities supported more than 372,000 jobs.

Like Loading...
‹ Aggressive initial attack calms wildfire near Nikolaevsk on Kenai Peninsula
Use caution with fire over Memorial Day Weekend ›