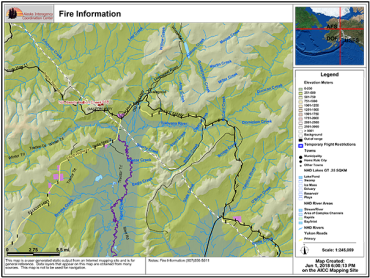 A pair of Alaska smokejumpers logged the first fire jump of the season Friday on a small fire burning close to the Trans-Alaska Pipeline about five miles southwest of Livengood.
The Ready Bullion Creek Fire (#103) was reported to the Division of Forestry who passed it along to BLM Alaska Fire Service at 3:20 p.m. because it was burning in AFS’s protection area. BLM AFS quickly launched an aircraft with eight smokejumpers aboard. Once over the fire, a smokejumper spotter aboard the plane was able to give a better description and location of the fire, which was mapped in a limited management option area on State of Alaska lands in the AFS Upper Yukon Fire Management Zone. However, since it was burning about 250 feet south of the pipeline directly north of Mile 3 of the Dalton Highway and near private property, State of Alaska fire management officials gave the green light for two smokejumpers to parachute into the area to put the fire out. The fire was described as smoldering in tundra on top of a ridgeline about a half a mile north of the Dalton Highway and not far from Livengood, a small mining community 80 northwest of Fairbanks off the Elliott Highway.
While it’s the second time smokejumpers have worked on an Alaska fire this season, it’s the first time they’ve responded by air. The first was the North Eielson Fire in Delta Junction. Smokejumpers were ferried by van to the North Eielson Fire near Delta Junction on May 11. Smokejumpers had since been on their way to a reported fire on two separate occasions when they were cancelled while enroute.
For more information, contact BLM AFS Public Affairs Specialist Beth Ipsen at (907)356-5510 or eipsen@blm.gov.
###