The Alaska Division of Forestry is working to contain a nearly 2,000-acre wildfire that was ignited by a coal seam fire near Healy on Tuesday.
The Louise Creek Coal Seam 2018 Fire is burning east of the Nenana River about 5 miles northeast of the community of Healy. The fire was mapped at approximately 1,900 acres early Wednesday morning, an increase of about 1,000 acres since late Tuesday night. 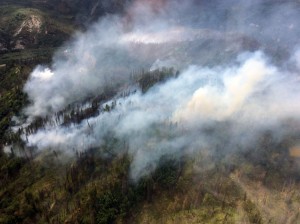 The fire was fanned to life Tuesday morning by windy conditions in the area and was identified by satellite imagery. At that point, the fire was estimated at only 5 acres and was exhibiting minimal fire behavior. However, fire activity intensified Tuesday at around 9 p.m. due to high winds and the fire size grew considerably in the matter of a few hours.
The fire is burning in a burn scar from previous coal seam wildfires in the area and actually merged with another, smaller coal-seam fire that was identified earlier in the season. The fire is still contained by an old dozer line on the west side and state forestry’s plan is to keep the fire east of the dozer line. No structures or other values at risk are threatened at this time.
Two water-scooping aircraft and a helicopter are being used to drop water along the western edge of the fire near the dozer line and four bulldozers are either on scene or enroute to the fire to clear parts of the old dozer line that have grown over.
Smoke from the fire is visible from the community of Healy and the Parks Highway.
The Type 2 UAF Nanook Wildland Fire Crew arrived at the fire Wednesday at about noon and the Gannett Glacier Type 2 Initial Attack Crew is expected to arrive from Palmer sometime this afternoon. Fire managers are assessing a possible burnout operation to keep the fire east of the old dozer line. Crews were brought in to support a possible burnout operation.
Due to the dangers posed by coal seams, no direct suppression tactics will be taken by firefighters on the ground and aircraft will be used to keep the fire in check with water drops.

A perimeter map of the Louise Creek Coal Seam 2018 Fire burning about 5 miles northeast of Healy.