Of the 21 active fires burning in BLM Alaska Fire Service protection area that covers most of the northern half of the state, the only three staff are in the Galena Fire Management Zone. As of today, 63 fires have burned 54,590 acres in BLM AFS protection area – most of which were consumed in the 34,499-acre Oregon Lakes Fire burning in the Military Zone near Delta Junction. This fire is being monitored by routine flights over the fire area.

Otherwise, the Galena Zone has nine active fires burning within its boundary that encompasses an area from the North Slope to Yukon River Delta. With the exception of one human-caused fire in Northwest Alaska, the rest are lightning-caused fires. 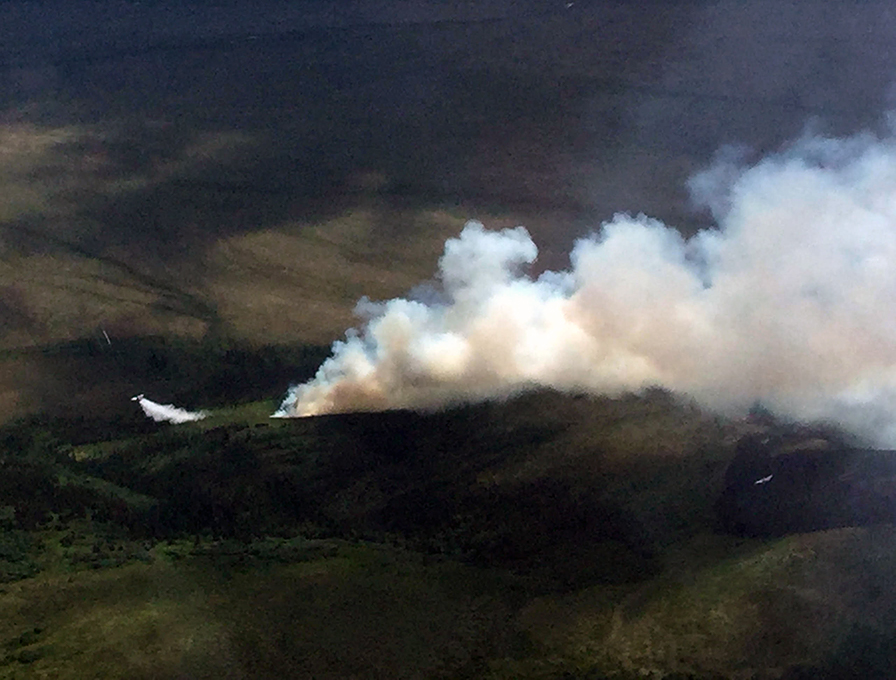 This fire is located about 15 miles northwest of Russian Mission, has burned an estimated 5,000 acres since it started on June 11.

After a few days of challenging wind shifts that pushed the fire south, BLM Alaska Fire Service firefighters used favorable winds yesterday to continue working toward containment of the lightning-caused fire. There are 34 people assigned to the fire including the 20-person Midnight Sun Interagency Hotshot Crew and eight smokejumpers. They conducted a burn operation along a creek running south of the fire to stop the fire’s progression. Aided by water-scooping airplanes, two helicopters and an air attack plane with personnel guiding efforts on the fire, they accomplished that goal yesterday. They will continue to fortify that line today.

The area surrounding the fire has experienced isolated showers and even lightning that started two new fires nearby. Four smokejumpers were able to disengage from the Koyukutuk River Fire and contained the nearby Pilcher 1 (#252) and Pilcher 2 (#253) fires burning within 10 miles of the west flank of the Kuyukutuk River Fire. Both fires are located 8-10 miles northeast of Marshall. They will check on these two fires again today to ensure they’re out.

The Kuyukutuk River Fire is burning about 10 miles northwest of a camp on the Yukon River where roughly 80 people are attending retreat. The fire is burning mostly in tundra, but the area between the fire and the camp has a mixture of hardwoods and spruce as well as high, rocky, tundra.

The weather forecast for the fire area includes possible thunderstorms in the afternoon that may produce erratic winds, possibly giving firefighters another test today. They reported the fire area was under cloud cover this morning.

This fire is burning 18 miles southeast of Koyuk is 80% contained. It has burned an estimated 82 acres.

The BLM AFS Type 2 North Star Fire Crew plus one firefighter from the Galena Zone have tentative plans to have work completed and demobilize by Tuesday. The crew spent yesterday checking the edges and extinguishing hot spots before continuing deeper into the interior of the fire perimeter. An unmanned aircraft system, or drone, aided the ground search.

The North River Fire (#218), burning 35 miles northeast of Koyuk, grew substantially in the past few days to 12,000 acres and produced smoke that was visible in Kaltag 70 miles to the southeast. June 124, 2019 photo by Phil Ooshawe, BLM AFS

This fire, burning 35 miles northeast of Koyuk, grew substantially in the past few days to 12,000 acres and produced smoke that was visible in Kaltag 70 miles to the southeast.

BLM AFS personnel flew a reconnaissance flight over the fire yesterday and reported the perimeter was 95 percent activity and burning in black spruce that produced the very visible smoke. The lightning-caused fire is burning in a limited management option area, and is not immediately threatening valuable resources or structures, the nearest of which is still at least 15 miles away.

This fire burned an estimated 22 acres on the northern side of the lake about 50 miles west of Kobuk before it was contained yesterday. The smokejumpers will demobilize today. Fire investigators were in the area yesterday to gather information about this human caused fire.