The Alaska Division of Forestry continued its aggressive response to a wildfire burning about 25 miles east of Fairbanks on Wednesday by adding another crew to the roster of crews already battling the blaze.

The 20-man White Mountain Type 2 Initial Attack Crew joined four other crews already on scene working to contain the 270-acre Caribou Creek Fire burning near the community of Two Rivers. The fire, which was reported on Sunday, is burning about 7 ½ miles north of Chena Hot Springs Road near Mile 18. 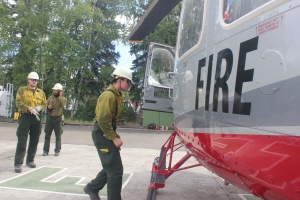 James Lilly, front, and other crew members of the 20-man White Mountain Type 2 Initial Attack Crew, boards a helicopter at Fairbanks Area Forestry on Wednesday, June 19, 2019 to be shuttled in to the Caribou Creek Fire. Photo by Tim Mowry/Alaska Division of Forestry

The Fairbanks-based White Mountain Crew returned home late Tuesday night after spending four days working on a small fire near the village of Nikolai in southwest Alaska. They barely had time to catch their breath before boarding a helicopter to shuttle them into the Caribou Creek Fire on Wednesday. The fire is not accessible by road and all firefighters have to be shuttled in by helicopter.

The addition of the White Mountain Crew puts the number of firefighters working on the fire at approximately 120. Crews are working to construct containment lines around the remote fire, which is burning on a steep hillside north of Caribou Creek and east of the Little Chena River. As of Tuesday night, the fire was 15 percent contained.

On Wednesday, state forestry maintained its aerial assault on the fire as helicopters and water-scooping aircraft continued strategic water drops on the fire to assist firefighters on the ground. An air tanker was also used to drop retardant around key parts of the perimeter to keep the fire from spreading. State forestry has been using water and retardant drops to keep the fire in check since it started early Sunday night.

The fire was originally estimated at 500 acres but that number has been reduced to 270 acres as a result of more accurate mapping. 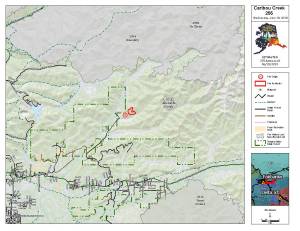 Fire managers are trying to keep the fire east of the Little Chena River, north of the Little Chena Dozer Line constructed during the 2004 Boundary Fire and west of structures on the east side of the fire. There are no structures immediately threatened by the fire but there are cabins to the south and southwest that firefighters have assessed to determine what protection measures need to be taken in the event the fire moves in that direction.

A helibase and staging area for firefighting personnel has been set up at Two Rivers Elementary School near Mile 18 of Chena Hot Springs Road and motorists in that area are advised to use caution for firefighting vehicles on the roadway.

A Temporary Flight Restriction is in place in the area for up to 6,000 feet elevation to provide a safe airspace for firefighting aircraft working on the fire.