The remote, lightning-caused fire approximately 7.5 miles north of Chena Hot Springs Road near milepost 18 was 40 percent contained as of Sunday morning, according to the Alaska Division of Forestry. 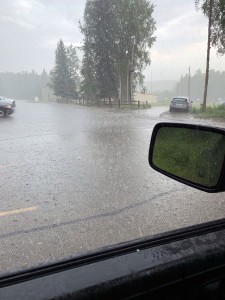 A storm cell dumped significant rainfall at the Caribou Creek Fire staging area at Two Rivers Elementary School on Saturday night, as well as on the fire. Photo by Brandon Kobayashi/Alaska Smokejumpers

On Saturday, water-scooping aircraft and helicopters were used to drop water on the west side of the fire before a large storm cell passed over and dropped significant rain on the fire.

Due to the wet conditions, there is little potential for growth beyond the existing burn area and firefighters are using this advantage to make good progress on putting in a fireline around the perimeter. The goal is to have a line around the entire fire by the end of shift today.

The addition of one Type 1 hotshot crew on Saturday should hasten work in completing the line around the fire. Additional crews are on order to take the place of crews that will be timing out in the coming days.

Once firefighters complete a containment line around the fire much work remains to cut up dead trees that have fallen or been blown down. Crews will then begin the process of gridding for hotspots 300 feet inside the perimeter of the fire.

Though the rain significantly moderated fire behavior, it will also make firefighters’ jobs harder because of the wet, slippery conditions.

Here is a roundup of other fires in the Fairbanks and Tok areas that the Division of Forestry is working on:

Smoke from the Olnes Pond Fire (#346) as seen from a helicopter carrying firefighers to the fire. Olnes Pond is in the bottom left of the photo. Photo by Ernest Prax/Alaska Division of Forestry

Olnes Pond Fire (#346) – Near Olnes Pond about 15 miles north of Fairbanks. Two helicopters and two engines responded to the 3-acre, lightning-caused fire burning in black spruce that was reported by several callers late Saturday afternoon. The helicopters used buckets to drop water on the fire to knock down the flames and firefighters began securing the perimeter. Six firefighters remained at the fire overnight and there was minimal growth on the fire due to the work of firefighters and precipitation on the fire. Firefighters continued securing the perimeter on Sunday and reported the fire was still smoldering and creeping. Values of concern include the trans-Alyeska Pipeline corridor and some homes within a mile of the fire.