Firefighters completed a control line around the Montana Creek Fire (#429) on Friday afternoon and the fire was mapped with a GPS at 365 acres. Containment has increased to 30 percent,, according to the Alaska Division of Forestry.

Firefighters are contending with hot, dry conditions as they work to contain the fire. The high temperature on Saturday in the area was 85 degrees. Similar conditions are expected to persist for the next several days.

A map showing the area where a “Level 1/Ready” evacuation alert has been issued for the Montana Creek Fire burning near Mile 98 of the Parks Highway. For a downloadable PDF version of the map go to Level 1-Ready evac map for Montana Creek.

Local fire departments from the Matanuska-Susitna Borough and City of Houston continue to support the fire by providing water tenders to fill portable water tanks set up around the perimeter to provide a water source for firefighters to use as they are mopping up.

Personnel dedicated to setting up protection around structures closest to the fire are poised and ready to respond for initial attack on any new fires that may start in the local area.

The cause of the fire remains under investigation and fire investigators are on scene.

Fire managers are asking for the public’s cooperation in avoiding the fire area for safety reasons. There is heavy equipment operating in the area and water tenders are traveling back and forth hauling water

into the fire to fill portable water tanks that firefighters are using to take direct suppression action and strengthen containment lines. Additional traffic in the area poses a safety hazard to both the public and firefighters and interferes with firefighting activity. 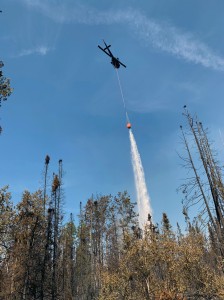 Like Loading...
‹ Shovel Creek Fire: Moment of Silence for the 25th Memorial of the Storm King Tragedy
Firefighters get assistance from Blackhawk helicopters on wildfire near Gakona ›