Firefighters remain focused on preventing the Rainbow 2 Fire from reaching recreational cabins on Clear Creek northwest of Delta Junction. Mother Nature provided some assistance on Tuesday in the form of light precipitation that fell over the fire, which helped bolster containment and mop-up operations. 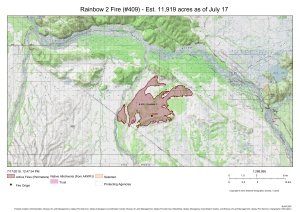 The Rainbow 2 Fire, which was started by lightning on June 29, has not shown any growth since it made a 3-mile wind-driven run to the north last Thursday (July 11) that left it only one-quarter mile from the nearest cabins on Clear Creek. The fire remains at an estimated 11,919 acres with zero percent containment, according to the Alaska Division of Forestry. There are 55 personnel assigned to the fire.

The fire continues to hold on the south side of Clear Creek and south of the cabins along the creek, which is where fire managers want to keep it. The fire is located about 15 miles northwest of Delta Junction.

The fire has been split into two Divisions – Division Alpha is on the northeast side of the fire and Division Zulu is on the northwest side of the fire. In Division Alpha, a crew will be scouting line today for opportunities to take direct action while also addressing any spot fires that may pop up on a ridge separating the fire from the Richardson Clearwater community. They will be assisted by a helicopter making water drops, if needed.

In Division Zulu on the northeast section of the fire, a 10-person module and a 20-person crew will continue to mop up 300 feet in from the perimeter to secure line and keep the fire from encroaching on the Richardson Clearwater community. 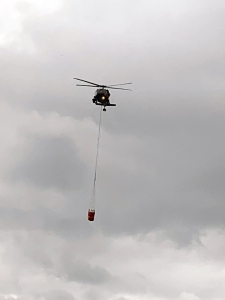 A Blackhawk helicopter from the Alaska Army National Guard hauls a bucket of water to drop on the Rainbow 2 Fire on Tuesday, July 16, 2019. Photo by Mike Goyette/Alaska Division of Forestry

The two Blackhawk helicopters from the Alaska Army National Guard that had been assisting on the fire with water drops were released from the fire at the end of shift on Tuesday. A Type 1 helicopter and the Delta Area contract helicopter remain on the incident to conduct water drops and logistical missions.

The fire management team is working with cabin owners to make them aware of safety concerns regarding helicopters dipping water out of Clear Creek.  Some private boats traveling on the river traveled close to where bucket dipping was taking place and managers were concerned about safety to the public and helicopter crews. The team has communicated with local property owners to make sure they know to wait until helicopters leave the area before traveling on the river.