The Alaska Division of Forestry is trying to mobilize more firefighters to help contain a remote wildfire northwest of Anchorage that is burning a mile from a historic hunting lodge that also serves as a checkpoint on the Iditarod Trail Sled Dog Race.

The Rainy Pass Fire (#662) as seen from the air Tuesday night during the initial attack response. The Rainy Pass airstrip is visible in the background about one-half mile away. Photo by Alaska Division of Forestry Air Attack

The Rainy Pass Fire (#664), which was started by lightning on Tuesday night, was still estimated at 120 acres as of 6 p.m. Wednesday. Only seven firefighters were working on the fire but more are on the way, assuming the weather cooperates.

Low clouds prevented fixed-wing aircraft from flying into the pass on Wednesday and helicopters were being used to shuttle firefighters into the fire from Talkeetna. While the poor weather conditions were hindering efforts to get personnel to the fire, the clouds were also moderating fire behavior and the fire was not spreading or growing toward the lodge or other structures.

The fire was reported at around 8 p.m. Tuesday after a pilot at the lodge witnessed a lightning strike start the fire about one-half mile from the Rainy Pass air strip and approximately 1 mile from the historic Rainy Pass Lodge. 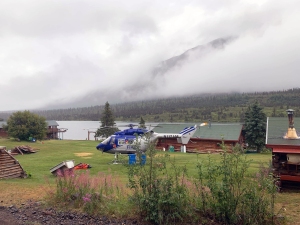 A helicopter contracted by the Alaska Division of Forestry sits near Rainy Pass Lodge on Wednesday morning, July 24, 2019 as smoke from the Rainy Pass Fire a mile away is visible. Photo by Greg King/Soloy Helicopters

The Rainy Pass Lodge is approximately 125 miles northwest of Anchorage, just south of the crest of the Alaska Range. It is at Mile 153 of the 1,000-mile Iditarod Trail Sled Dog Race and serves as a checkpoint for the famous dog sled race. In addition to the lodge, there are 10 other cabins and structures on site. Rainy Pass Lodge is Alaska’s oldest hunting lodge. It was founded in 1937 by Bud Branham, a legend among Alaska’s Master Guides.

Weather conditions prevented air tankers from Palmer and Fairbanks from reaching the fire to drop retardant around it. A plane with eight smokejumpers aboard also had to divert to McGrath because of bad weather. The only firefighters able to make it to the fire Tuesday night were three helitack personnel from Mat-Su Area Forestry.

The fire was initially sized up at 3-5 acres but grew to 50 acres by late evening. The three firefighters on scene focused their efforts on protecting a fuel cache at the air strip by laying hose and pumps to wet down the area around the fuel cache and extinguish encroaching flames. Firefighters also began setting up pumps and hose around the lodge and other buildings in the area to protect them if the fire approached.

Due to the rapid advancement of the fire and proximity to the lodge, the decision was made to evacuate 26 employees and guests late Tuesday night. Mat-Su Area Forestry worked with the Alaska Rescue Coordination Center in Anchorage to carry out the evacuation. A Blackhawk helicopter was used to transport the evacuees to Anchorage. Twenty horses at the lodge were released for their safety and are currently onsite.

On Wednesday, four smokejumpers were able to deploy on the fire but four others were not, putting the total number of personnel working on the fire at seven. Firefighters’ first priority was setting up hose, pumps and sprinklers around the lodge and other buildings on site to make them defensible if the fire threatens them. There is a small creek between the fire and lodge and the fire had yet to cross the creek.

Given the poor weather conditions, fire managers spent much of Wednesday trying to figure out how to shuttle more firefighters into the fire. A Type 2 crew from the Mat-Su Area was transported to Talkeetna by ground to be helicoptered into the fire but that operation was still underway as of 6:30 p.m.

A 14-person helitack module from Plumas National Forest in California was also waiting to be transported to the fire.