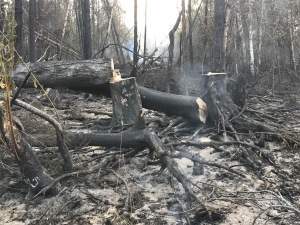 Crews cut hazard trees near edge of fireline on the McKinley Fire on August 22, 2019. Alaska .of Forestry photo

“Unprecedented fire risk conditions for the Southcentral and Kenai Peninsula regions and the ongoing large project fires in these areas have created statewide challenges for wildland fire response agencies,” Feige wrote in her public order extending the fire season. “Any new fires will further stress the overall statewide response capabilities.”

Alaska’s statutory wildfire season normally begins on April 1 and ends on August 31. Extension of the fire season under state law means that small- and large-scale burn permits will be required for open debris burning or the use of burn barrels through September 30.

This is the first time the fire season has been extended since a 2006 bill shifted the five-month season to start and finish one month earlier. Feige determined the one-month extension was necessary to ensure public safety. 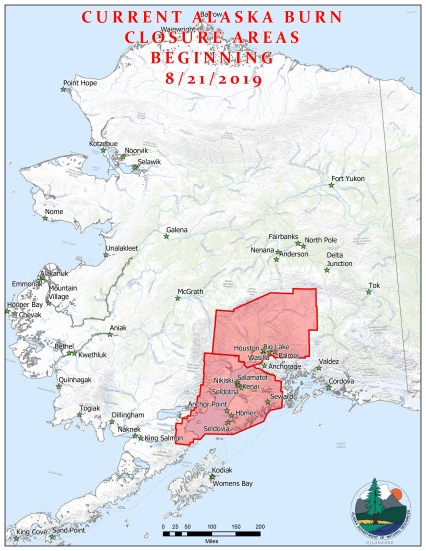 A map of the burn closure areas for the Kenai Peninsula and Mat-Su Valley boroughs. For a downloadable PDF version of the map go to Emergency Burn Closure Map KPB and MSB 8-21-19_

An emergency burn closure remains in effect for the Kenai Peninsula and Matanuska-Susitna boroughs prohibiting any open burning due to the extremely dry conditions. The closure took effect on August 21 and applies to all types of burning, including campfires and the use of charcoal grills, on state, private, municipal and borough lands in the closure areas. That includes campfires in established fire pits or rings in designated campgrounds. Devices that can be turned on and off — such as gas and pellet grills and backpacking or camp stoves that use fuel or compressed fuel canisters — are still allowed, though users are urged to be cautious with them as well. The emergency burn closure will remain in effect until conditions moderate.

The long-range weather outlook includes no forecast for significant rain in Southcentral Alaska for the next week. Fire indices are at record-high levels on the Kenai Peninsula and Mat-Su Valley. Given the current wildfire activity and the extremely dry conditions, the Division of Forestry asks the public to be very careful with any activity that could spark a wildfire.