7:45 p.m. – An explosive wildland fire on the Kenai Peninsula forced the evacuation of hundreds of homes and burned at least six structures on Monday.
The 640-acre Card Street Fire was reported as a 1-acre fire by Alaska State Troopers at 1:52 p.m. near the community of Sterling. The fire was burning in grass in an area accessible only by four-wheeler.
Firefighters from the Alaska Division of Forestry’s Kenai are office responded by helicopter, engines and four-wheelers but the fire had spread to 4 acres and was growing by the time they arrived. The fire was actively torching and crowning in trees when firefighters arrived.
Approximately 200 homes were threatened by the fire and firefighters and Alaska State Troopers immediately began evacuation procedures using a reverse 911 call to inform residents in the area of the situation. It’s unclear at this point whether the structures burned were homes, outbuildings or other types of structures.
Central Emergency Services from Soldotna, the Nikiski Volunteer Fire Department and Kachemak Bay Emergency Services also responded with engines and firefighters to assist in suppression efforts. Three air retardant tankers were called in to drop retardant on the fire and two helicopters conducted bucket work on the fire and another was enroute. There was also a U.S. Forest Service engine that responded to the fire.. Despite the aggressive initial attack efforts, the fire continued to grow and was estimated at 75 acres by 3 p.m.
The evacuation was expanded to include residential areas on the north and south sides of the Kenai River after the fire jumped the Kenai Keyes Road. The fire doubled in size to 150 acres by 5 p.m. and was estimated at 640 acres about an hour later. The fire was threatening to cross from the north side to the south side of the Kenai River but that hadn’t happened as of 7:30 p.m., though the fire had spotted across the river in a few spots. A helicopter was being used to extinguish those spot fires to prevent the fire from becoming active on the south side of the river.
Firefighters successfully conducted burn-out operations along Kenai Keyes Road to reduce potential fuel for the fire and more resources were ordered to assist with suppression efforts.
Eemergency evacuation shelters have been set up at the Sterling Community Center and Soldotna Sports Complex. The Kenai Peninsula Borough Emergency Services Department set up an information center for resident to get information about the fire. The center can be reached at (907) 714-2495. 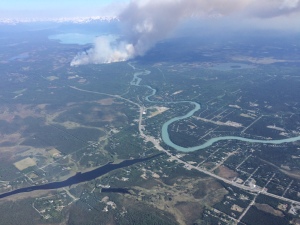 An aerial photo of the 640-acre Card Street Fire burning near Sterling on the Kenai Peninsula on Monday.

Like Loading...
‹ Extreme fire danger in Katmai National Park and Preserve prompt fire officials to prohibit the use of campfires
Red Flag Warnings in Effect for the Sockeye Fire Area, Media Availability at 2 p.m. ›