Firefighters on the ground and in the air are working to gain control of a wildfire burning close to the village of Tetlin, about 20 miles south of Tok.
The Tetlin River Fire was estimated at approximately 450 acres as of 8 p.m. and multiple aircraft were working to suppress the fire from the air in support of approximately 30 firefighters battling the blaze on the ground. More firefighters from the Alaska Division of Forestry were en route to the fire from Fairbanks and Palmer.
Air retardant tankers were able to slow the spread of the fire by dropping several loads of retardant on the head of the fire, which was moving in the direction of Tetlin, a small, road-accessible village located about 2 miles to the north. Water-scooping aircraft and helicopters were being used to drop water on the flanks of the fire to slow its spread.
No evacuations have been ordered for the village at this point. A bulldozer has been staged in the village in the event it is needed to put in a fire break around the village. A second load of smokejumpers is en route to the fire, as well as two more initial attack crews.

The fire had grown from about 5 to 450 acres since it was discovered at approximately 2:30 p.m. The fire is burning mainly in black spruce with some hardwoods.
The fire is located south of the Tanana River, just outside the Tetlin National Wildlife Refuge, and is surrounded by lakes and ponds. It is approximately 20 miles south of Tok and 10 miles south of the Alaska Highway. Traffic on the highway has not been impacted.
A load of eight smokejumpers from the BLM Alaska Fire Service was dropped on the fire and is leading the suppression on the ground, assisted by the Tanana Chiefs Conference Type 2 initial attack fire crew. The White Mountain Type 2 initial attack crew from Fairbanks, is en route to the fire and should arrive at around midnight. The Pioneer Peak Interagency Hotshot Crew from the Division of Forestry is also en route to the fire from Palmer.
Boats from the village of Tetlin are being hired to shuttle firefighters on the ground
The cause of the fire is unknown at this time. 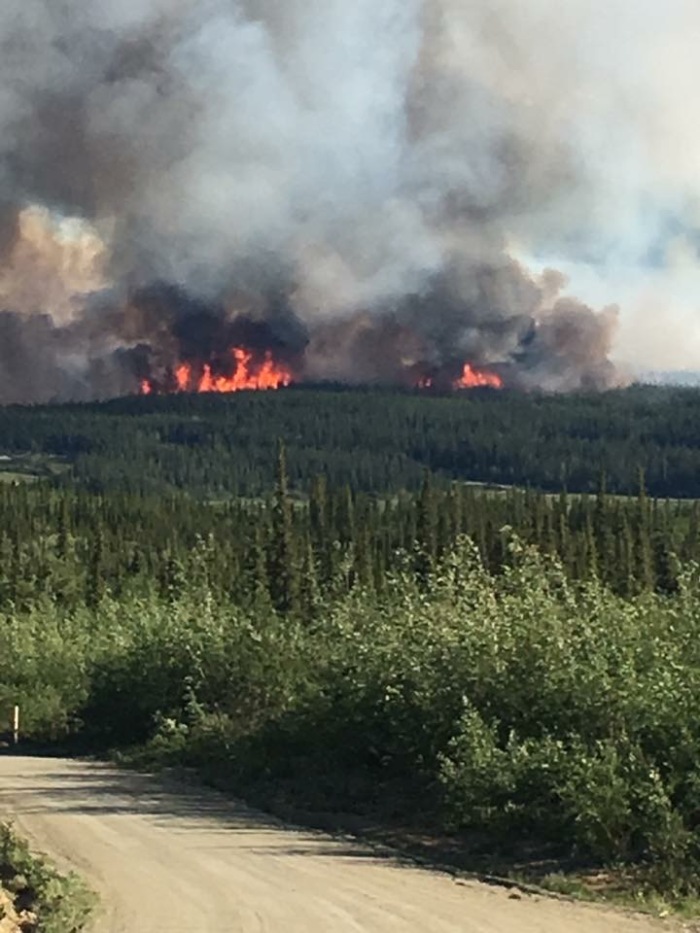 A photo of the Tetlin River Fire taken from the road leading to the village of Tetlin. Photo by Angie Isaac.