Wildland firefighters took advantage of cooler, cloudier weather on Monday to start putting in containment lines around the perimeter of the 1,000-acre Tetlin River Fire about 20 miles south of Tok. The fire did not receive any precipitation on Sunday or Monday and the higher humidity the past two days has helped moderate fire activity.
While the size of the fire hasn’t changed in terms of acres burned, the number of personnel working on it has essentially doubled from Sunday to Monday as more crews arrived to assist with suppression and mop up efforts. There are now approximately 230 personnel working on the fire, including eight different crews, all from Alaska.
A Type 3 incident management team from the Alaska Division of Forestry took control of the fire on Sunday at approximately 1 p.m. and more resources have been mobilized to the fire to begin mop-up operations. The fire is threatening approximately 120 residences in the community of Tetlin, which is located about 16 miles off the Alaska Highway. 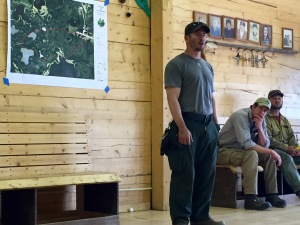 The northern edge of the fire is about three-quarters of a mile from the village where it bumped up against the community airstrip. Firefighters are focused on securing the northern flank of the fire closest to the village and mopping up next to the airstrip. Crews are also cutting saw line and setting up hose around the northern flank to begin mop-up operations.
Crews working on the fire are all from Alaska and include the Pioneer Peak Interagency Hotshot Crew, the White Mountain Type 2 Initial Attack Crew, the Tanana Chiefs Type 2 Initial attack Crew and Type 2 crews from Buckland, Fairbanks, Nikolai and the Upper Tanana region.
A temporary flight restriction has been put in place for the Tetlin River Fire to allow aircraft working on the fire to operate safely.The TFR covers a 5-mile radius around the fire and pilots should check the status of the TFR before flying in the area.
A community meeting was held in the village on Monday to keep local residents informed and approximately 25-30 people attended the meeting. Another meeting is scheduled for 7 p.m. on Thursday.

The cause of the fire is unknown at this time but is believed to be human caused and is under investigation.

An Alaska Division of Forestry map shows the perimeter of the approximately 1,000-acre Tetlin River Fire as of 8 p.m. Sunday night. 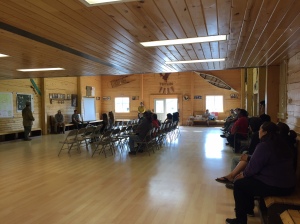 Residents from the community of Tetlin listen to fire managers give an update on the approximately 1,000-acre Tetlin River Fire on Monday afternoon. Photo by Sarah Saarloos/Alaska Division of Forestry