Wildland firefighters battling the 1,000-acre Tetlin River Fire south of Tok continued to make good progress putting in containment lines around the perimeter of the 1,000-acre Tetlin River Fire about 20 miles south of Tok on Tuesday but they are being challenged by difficult weather conditions and harsh terrain.
After a brief respite of cooler, cloudier conditions on Monday, firefighters found themselves contending with another hot, dry, windy day on Tuesday that caused several flare-ups and isolated torching on the southwest corner of the fire. Three helicopters were used to drop water on the flare-ups to prevent the fire from spreading.
No further growth in the fire is expected and the threat to the community of Tetlin, which is located 16 miles off the Alaska Highway, has diminished as more resources have been deployed to the fire. The fire was listed as 5 percent contained as of late Monday night.
Unlike other parts of the Interior that have received rain in the last few days, no measureable precipitation has fallen in the Tok area and conditions continue to be hot and dry with gusty winds.
More than 230 personnel are working on the fire, including 10 Alaska hand crews. Two Alaska Division of Forestry crews, the UAF Wildland Fire Crew and Gannett Glacier Type 2 Initial Attack, arrived on Tuesday to assist with suppression efforts, which will put the total number of personnel working on the fire close to 300. 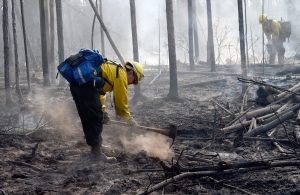 Firefighters are focusing on reinforcing the northwest flank of the fire closest to the village of Tetlin while also cutting saw line along the southern flank of the fire toward Gasoline Lake. The northern edge of the fire is about three-quarters of a mile from the village where it bumped up against the community airstrip. Crews are currently mopping up that section of the fire.
Crews were expected to have hose placed around the entire fire perimeter by the end of shift on Tuesday to begin mop-up operations today.
One of the highest priorities for crews is to mitigate hazard trees that pose a safety threat to firefighters in the windy conditions. The burned trees are vulnerable because their roots systems have burned, making them weak and prone to falling or getting blown. Trees are also falling in the Tetlin River, which is being used for boat transport of firefighters and is also a transportation corridor for residents in the village of Tetlin. Trees that fall in the river pose a safety threat to both firefighters and residents who use the river. 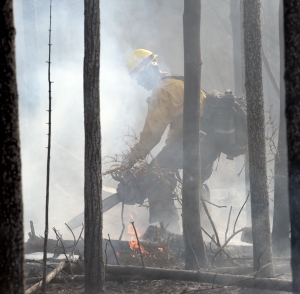 Several crews that are camped out along the fire perimeter to improve efficiency and reduce travel time will begin mopping up on the inside of the fire perimeter on Tuesday in an effort to tighten the noose on the fire.
The Tetlin River Fire started on Friday, June 17 and quickly advanced on the village driven by south winds. The fire is believed to be human caused and is under investigation.
A community meeting was held in the village on Monday and another meeting is scheduled for 7 p.m. on Thursday.
A temporary flight restriction has been put in place for the Tetlin River Fire to allow aircraft working on the fire to operate safely. The TFR covers a 5-mile radius around the fire and pilots should check the status of the TFR before flying in the area.
Crews working on the fire are all from Alaska and include the Pioneer Peak Interagency Hotshot Crew, the Gannet Glacier, White Mountain and Tanana Chiefs Type 2 intital attack crews, the Region 10 U.S. Forest Service crew and Type 2 crews from Buckland, Fairbanks, Nikolai, the Upper Tanana region and the University of Alaska Fairbanks.

Fairbanks #1 crew boss Kias Peter keeps an eye on his crew as they mop up along the perimeter of the Tetlin River Fire on Monday, June 20, 2016. Photo by Sam Harrel/Alaska Division of Forestry 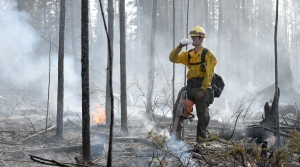