A photo of the Hayes Creek Fire (#301) taken by smokejumpers prior to deploying on the fire approximately 20 miles northwest of Fairbanks on Thursday, June 20, 2019. Photo by Chris Dudley/Alaska Smokejumpers

Firefighters are mopping up a small wildfire approximately 20 miles northeast of Fairbanks that was reported late Thursday afternoon.

The 2 ½-acre Hayes Creek Fire (#301) is located approximately 1 mile north of the Chatanika River and 9 miles east of the Elliott Highway from Olnes Pond. The fire was reported as a one-half acre fire just before 5 p.m. Thursday. Smoke was visible from the Elliott Highway and the Alaska Division of Forestry received multiple reports of the fire from residents along the highway.

Four firefighters from Fairbanks Area Forestry were dropped off by helicopter because the fire was not accessible by road or trail. They were joined by eight smokejumpers from the BLM Alaska Fire Service who were deployed to the fire for initial attack. With help from a helicopter dropping water on the fire and an air tanker that boxed the fire in with retardant, the 12 firefighters worked late into the night to secure the perimeter of the fire and contain it to 2 ½ acres.

Fairbanks Area Forestry Wildland Fire and Resource Technician Owen Solomon (facing camera) briefs members of the Lewis and Clark Interagency Hotshot Crew from Montana about helicopter safety prior to the crew being flown to the Hayes Creek Fire north of Fairbanks on Friday, June 21, 2019. Photo by Tim Mowry/Alaska Division of Photo

A hotshot crew that had been imported from Montana to work on the Caribou Creek Fire (#255) east of Fairbanks near Two Rivers was instead flown to the Hayes Creek Fire Friday to replace the smokejumpers so they could be available for initial attack on new fires elsewhere in the state. The hotshot crew will work with the four Fairbanks Area Forestry firefighters to begin mopping up the fire. Though the fire perimeter is secured, the fire burned deep into the duff and there is still considerable heat remaining in the interior and heel of the fire that needs to be extinguished.  The crew was working Friday to remove snags and open up hotspots. The fire is burning in black spruce and mixed hardwoods and lack of a water source to pump water from will make mop-up operations more difficult. It will likely take at least a few days to fully contain the fire.

The hotshot crew will be replaced by a 10-person crew from the U.S. Forest Service on Saturday and the hotshots will then likely be reassigned to the Caribou Creek Fire (#255) burning east of Fairbanks near Two Rivers. 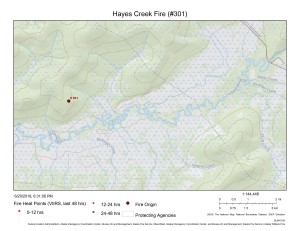