A fire has destroyed one structure and forced the evacuation of a subdivision in the community of Sunshine near Talkeenta. 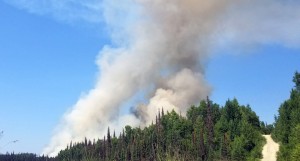 Smoke billows up from the Malaspina Fire in this picture taken from South Malaspina Loop on Sunday, July 7, 2019. Photo by Stephanie Bishop/Alaska Division of Forestry

The Malaspina Fire (#451) is located off South Malaspina Loop about one mile north of the Montana Creek Fire (#429) near Mile 98 Parks Highway. The fire was estimated at 60 to 80 acres as of 7 p.m.

The fire was reported to the Alaska Division of Forestry at about 3:30 p.m. and grew quickly, sending up a large column of smoke. 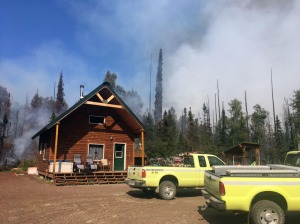 Multiple air tankers were launched to drop retardant around the fire while water-scooping aircraft and helicopters, including two Blackhawks from the Alaska Air National Guard, are dropping water on the fire. The retardant drops have been effective and are helping slow the spread of the fire.

The Baker River Hotshots and the White Mountain Type 2 Initial Attack crew were pulled off the nearby Montana Creek Fire and sent to the Malaspina Fire to help with initial attack. Smokejumpers and firefighters from the Mat-Su Area Forestry office are also on scene to initial attack the fire. The Joint Base Elmendorf Richardson Task Force is on scene and engines and water tenders from local fire departments in the Matanuska-Susitna Borough are on scene to assist with structure protection.

The cause of the fire is undetermined and is under investigation. 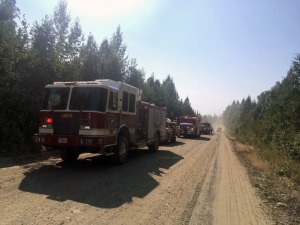 Emergency vehicles from the Matanuska-Susitna Borough are staged along Montana Creek Road to assist with structure protection on the Malaspina Fire on Sunday, July 7,2019. Photo by Brentwood Reid/Alaska Division of Forestry