Hot and dry conditions remain over most areas of the Upper Yukon Zone. Temperatures are forecasted to be in the 80s over the next several days. Winds will generally be out of the west at 5-10 mph. Some isolated thunderstorms are still possible, but if they materialize, they will be accompanied by moisture. Gusty winds could also be created by these storms. Relative humidity for the zone is expected to be 35-40% or higher. Fire activity could get a boost from solar heating as skies clear. 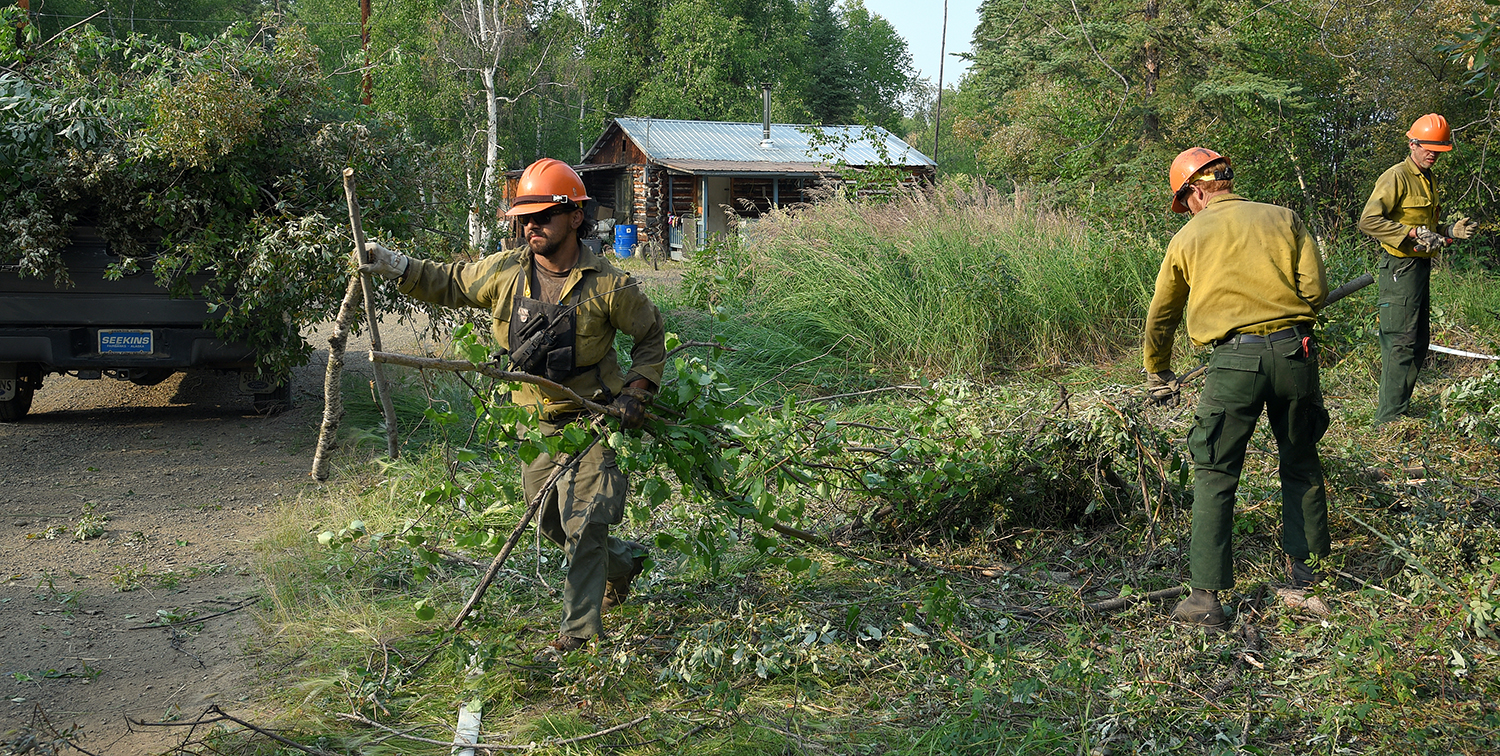 Members of the North Star Type 2 hand crew pick up brush piles in the village of Chalkyitsik, Alaska, on Saturday, July 13, 2019. Firefighters have completed their structure protection setup in the community of 57 residents. The Frozen Calf Fire (#367) and the Bearnose Hill Fire (#407) continue to grow toward the village. Sam Harrel/Alaska Interagency Incident Management Team

Twenty-eight fires are burning within the Upper Yukon Fire Management Zone, but most are not threatening people or property. Eight of the fires are staffed with firefighters, who continue to focus on village safety, prepare firelines and lay hose near cabins and allotments. Here is a summary of some of the more significant fires burning in the Yukon Flats and surrounding areas: 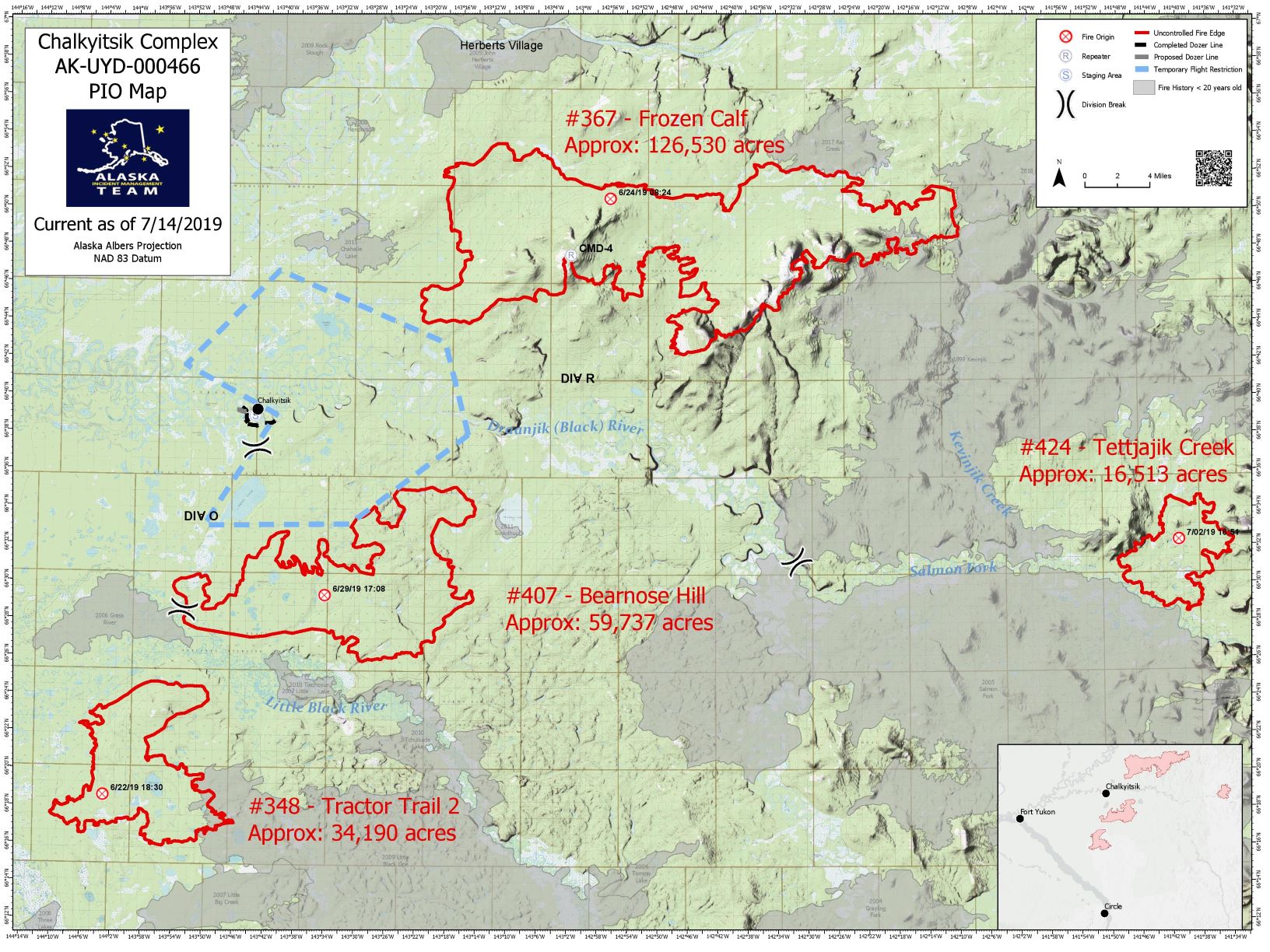 Fire behavior was active Saturday on the Bearnose Hill Fire (#407) and Tractor Trail 2 Fire (#348) on their north and northeast flanks where prevailing southwest winds pushed their growth to the east. The Frozen Calf Fire (#367) was very active. Its growth was to the southwest as it backed and flanked into the wind toward allotments at Chahalie Lake and the Draanjik River (formerly the Black River). The Frozen Calf Fire remains north of the Draanjik. Crews in Chalkyitsik improved indirect dozer lines to the south and west of the village with hose lays in preparation for potential burnout operations. Firefighters continued to haul away brush and test sprinkler systems set up throughout the village.

Under the direction of fire managers, firefighters are identifying options for additional indirect lines between the fires and values at risk. Crews are focusing on connecting existing natural features that would be used as control lines for firing operations to remove the burnable vegetation ahead of advancing fires. The result of this work would remove the fuels from ahead of the Frozen Calf Fire to protect Chahalie Lake and the allotments along the north side of the Draanjik Crews; and from ahead of the Bearnose Hill Fire to protect Chalkyitsik and allotments along the south side of the Draanjik.

The Bearnose Hill Fire remains a little more than a mile away from Ohtig Lake where firefighters are prepared to burnout around an allotment if the fire approaches.

Firefighters are finishing point protection measures on allotments along the Draanjik River corridor east of Chalkyitsik. As this work is completed crews are moving to Herbert’s Village on the Porcupine River to begin brushing around structures and setting up pumps and hose lays.

A Temporary Flight Restriction (TFR) is in place over Chalkyitsik and some of the surrounding area to provide a safe operating environment for firefighting aircraft. Go to https://tfr.faa.gov for more information on the TFR.

Final update: The Yukon Charley and Biederman Bluff fires are burning on opposite sides of the Yukon River approximately 55 miles northwest of Eagle, Alaska. Since operationally all allotments and cabins have been lined and have hose plumbed for future needs, fire personnel have demobilized and reassigned to another fire. Firefighters will be re-deployed to the fire if situations warrant. 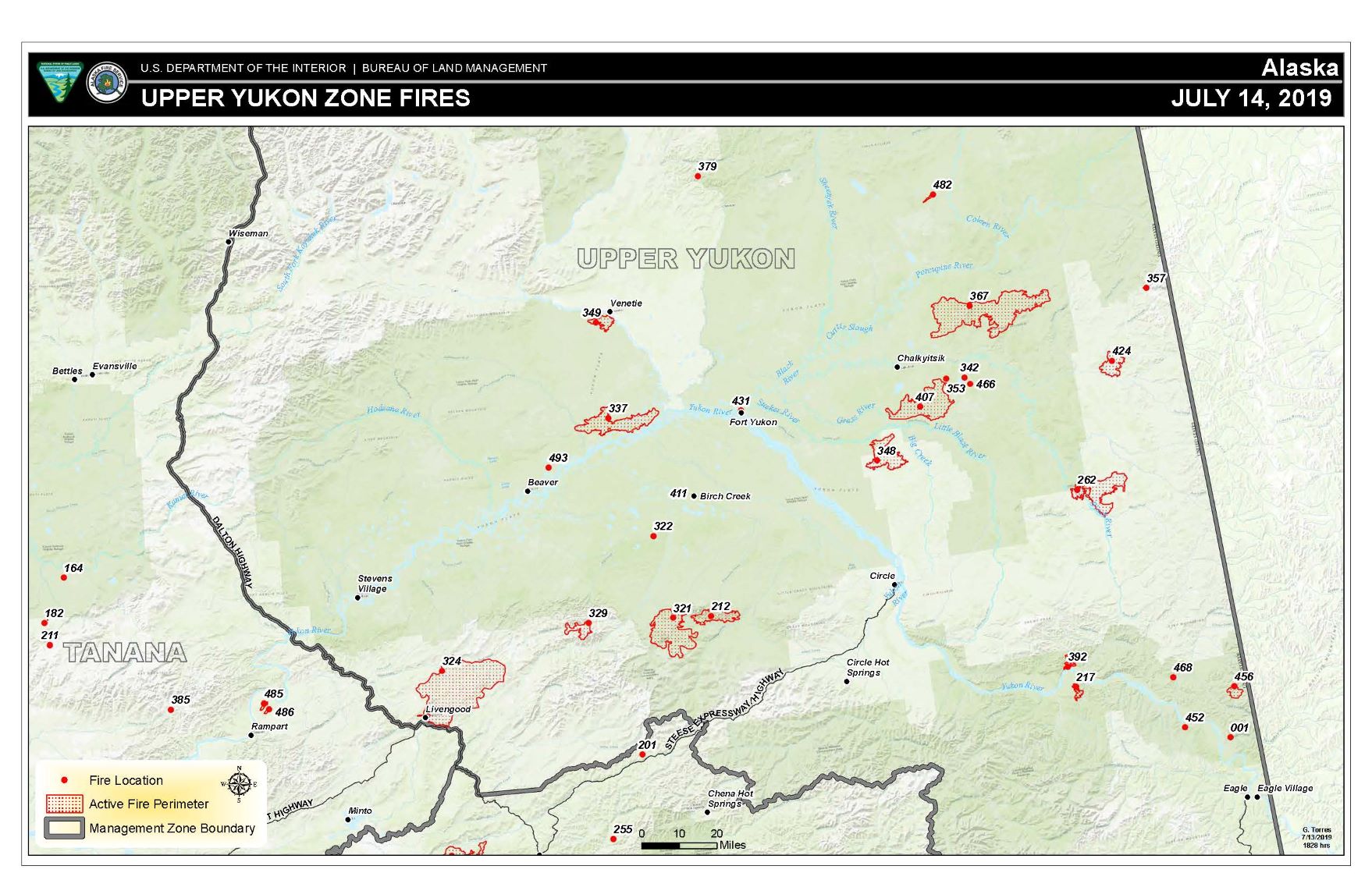 The Hadweenzic River Fire is burning approximately 23 miles west of Fort Yukon. No rain and warmer weather yesterday translated into moderate fire behavior with isolated torching, and slow but steady growth on the ground as fuels continue to dry. Crews repositioned across the fire area and continued to meet the objective of protecting structures by laying hose lines and pumps where needed. A communications repeater was installed yesterday providing needed communications between crews on the Hadweenzic and Tony Slough Fires. Transporting crews and resources in remote areas is accomplished typically by either helicopter or boat.

Fire behavior was more active yesterday as warmer temperatures and lower relative humidity returned to the area. Protecting structures and the village of Beaver remain the top priority. The Incident Management Team is moving additional crews into the area which should arrive late today or tomorrow. EMT’s in place continue to keep the crew as healthy as possible which enables firefighters to safely yet aggressively fight fire when needed. A helicopter reconnaissance flight to accurately map the fire perimeter and determine acreage and direction of fire growth will be accomplished as air resources are available. The fire is burning about eight miles northeast of the village of Beaver.

The Chandalar River Fire is burning approximately five miles southwest of Venetie. A reconnaissance flight was flown yesterday, which showed the fire had minimal spread. Yesterday the area had significant cloud cover until around 12:30, but then improved to around 50%. Temperatures reached into the 60’s. Winds were out of the southwest all day around 5-10 with gusts to 15 mph. A five-mile burning operation to protect Native allotments has been pushed out until the end of next week, waiting for fuels to become receptive. This decision is based on weather forecasts that predict the fire area will receive more rain. The operation will probably take two days to complete. Today crews will widen the protective line around the allotments on the west end. The fire is currently one mile south of those allotments. The fire was last mapped on July 10 at 9,108 acres.