7:30 p.m. – The Sockeye Fire north of Willow is now estimated at almost 1,100 acres and is growing on both sides of the Parks Highway.
The road remains closed from Fishhook-Willow Road at 71 Mile on the south to 77 Mile on the north and it is unknown at this time how long the road will be closed.
Evacuation notices have been delivered to residences from Mile 72 to 77 and evacuations are still in progress. At last report at least 20 homes had been evacuated and that number is expected to grow as the fire size increases.
The fire is burning extremely intense and firefighters have switched from an offensive to defensive strategy. Firefighters are focusing on structure and point protection while aircraft continue to drop retardant and water on the fire. Multiple aircraft from the Alaska Division of Forestry and Alaska Fire Service are continuing to drop retardant and water on the fire.
More resources have been ordered for the fire, including five hotshot crews from the Lower 48 . Three Blackhawk helicopters from the Alaska Air National Guard have also been brought into service to help with bucket work on the fire. 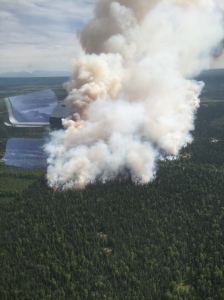 An aerial photograph of the Sockeye Fire burning north of Willow, which at last report was estimated at 1,100 acres and still growing. Photo by Division of Forestry Air Attack. 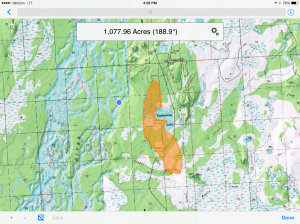 A map showing the area where the Sockeye Fire north of Willow is burning as of approximately 4:30 p.m.