A Division of Forestry heliattack crew, eight BLM Alaska Fire Service smokejumpers and four water-scooping Fire Boss airplanes rushed to aggressively attack a wildfire burning 17 miles east of Lake Louise Thursday evening. It was the second fire of the day for Copper River Area Forestry. A private aircraft reported the fire to the Tok Forestry Office at 5:35 p.m. Despite plotting in a limited suppression area, fire managers decided a non-standard response was warranted because the fire was a half a mile from full 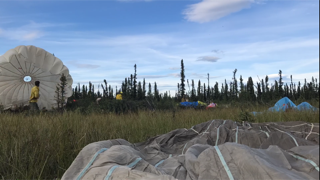 management area and within four miles of structures. The Copper River Area helitack crew arrived on scene and reported the fire creeping through black spruce with some single tree torching observed. Air attack, jumpers and Fire Bosses arrived a short time later and dumped water on the fire from nearby lakes and ponds. Meanwhile, firefighters put in a saw line and a hoselay to douse the flames with water. By the end of the night, the 2.7 acre First Hill Lake Fire (#390) was 70 percent contained with 100 percent containment achieved today.

A Division of Forestry helicopter drops buckets of water on the First Hill Lake Fire on Thursday, Aug. 10, 2017. Photo by Logan Chuchwell

Earlier that morning, firefighters from DOF and local volunteer fire departments suppressed a small fire ignited by fireworks near the Copper River.

Meanwhile, emergency firefighters from the villages of Minto and Marshall continue to mop up the Chistochina River Fire (#381), working in from the perimeter utilizing hose lays with support from Gakona Volunteer Fire Department water tenders. The cause of the fire has yet to be determined.

Fire activity is predicted to moderate in the Copper River Basin after a week of very high fire danger that triggered DOF officials to implement burn suspensions. The forecast calls for cooler temperatures and rain this weekend. A light drizzle was present Friday night to help moderate the hot, dry conditions.