As of Thursday evening, the Deshka Landing Fire is not significantly expanding. The estimated size of the fire has been reduced to 1,543 acres, a decrease of almost 700 acres. The reduced acreage is due to better mapping. The fire is 15% contained. 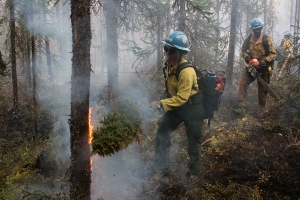 A member of the Prineville Hotshots swats flames with a spruce bough on the Deshka Landing Fire on Thursday, August 22, 2019. Photo by Mike McMillan/Alaska Division of Forestry

No structures or private land have been involved. Approximately 165 firefighters and support personnel continue to be actively engaged in various tasks to limit the fire’s spread using direct tactics assisted by water and retardant aircraft.

The fire continues to slowly burn on land administered by the State of Alaska and has moved onto the Nancy Lakes State Recreation Area.

Current containment efforts are focused on the south and eastern flanks of the fire by building fireline directly on the fire’s edge and using pumps and hoses where needed. Helicopters are being used to move equipment and personnel into remote sections of the fire and to support work on the ground by dropping water on hot spots. 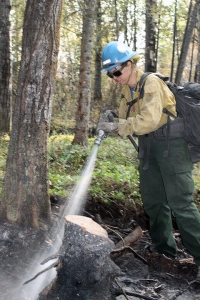 A member of the Prineville Hotshots sprays a hotspot on Deshka Landing Fire near Willow on Thursday, August 22. Photo by Mike McMillan/Alaska Division of Forestry

One of the issues facing firefighters is the danger from falling trees in the forested areas. With the extremely dry conditions, the fire is moving into the root systems of both live and dead trees and trees are falling over. Certified fallers are cutting trees before firelines can actively be built in some areas.

EVACUATIONS: There are no evacuation orders in affect at this point. Residents living to the east of the fire are urged to be prepared for evacuation if conditions change. The Red Shirt Lake area has been closed for recreational and public use. A TFR (Temporary Flight Restriction) is in place over the fire area which includes the north half of Red Shirt Lake. Access for homeowners is only allowed through the southern portion of the lake.

CLOSURE ORDERS: Nancy Lake State Recreation Area is closed to recreation and hunting. Hunters are being urged to stay away from the fire area to assure no conflicts with fire fighters.

WEATHER: Forecast over the fire suggests that conditions should be stable until Saturday morning when a weak front will bring a short period of increasing winds and very scattered light showers. After the weekend, the weather is predicted to return to a dry period. 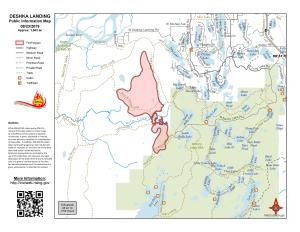